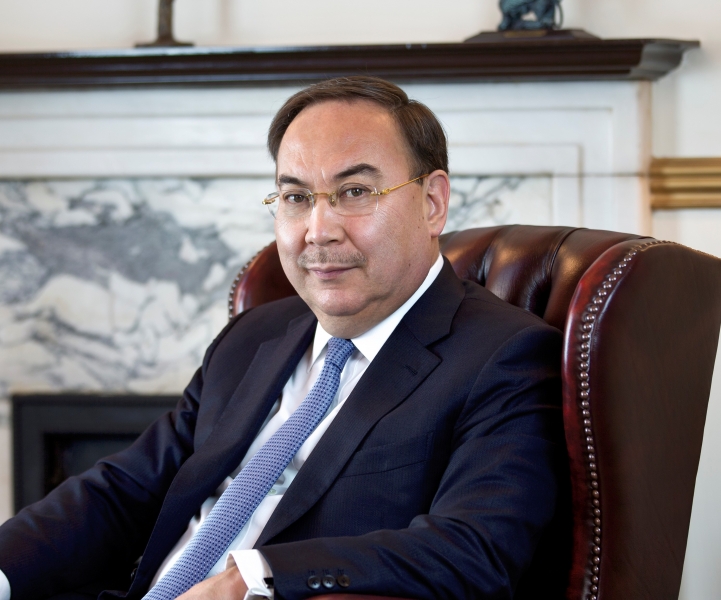 An Interview with His Excellency Erzhan Kazykhanov, Ambassador of Kazakhstan to the United States

What is the current state of Kazakhstan’s economy?

Kazakhstan has the strongest economy in Central Asia, earning a spot among the top 30 countries of the World Bank’s “Doing Business 2019’’ report. With an abundance of natural resources and a unique geographical location as a bridge between the East and West, Kazakhstan has become a beacon of economic growth and an attractive destination for trade and foreign investment.

As the country continues to diversify its economy, the Government of Kazakhstan has adopted numerous business-friendly policies to attract more investment into the country, including exemption from the value-added tax, corporate income tax, property tax, and land tax, as well as exemption from customs duties. Additionally, Kazakhstan has developed critical transportation infrastructure to facilitate trade across the whole of Eurasia.

In 2018, Kazakhstan launched the Astana International Financial Center (AIFC) as we aim to become a major financial hub in the region. Partnering with American companies like Nasdaq, AIFC serves as a trading and financing platform for foreign and domestic investors.

Kazakhstan’s economic reforms have paved the way for international investments. The U.S., for example, has traditionally been the biggest investor in Kazakhstan with total investments exceeding $45 billion and more than 700 American companies are operating in Kazakhstan.

Will you discuss the policies and reforms being enacted by the government of Kazakhstan?

Kazakhstan’s economic success is the result of numerous reforms and business-friendly policies. Kazakhstan is constantly working to improve its policies in order to create an economic environment that is attractive to foreign investment. These efforts largely began with the 100 concrete steps launched in May 2015 at the Astana Economic Forum, and are categorized into five areas of institutional reforms: the formation of a professional state apparatus, advancement of the rule of law, industrialization and economic growth, enhanced identity and unity, and the formation of accountable government.

Through these institutional reforms, Kazakhstan has positioned itself as a regional hub for trade. Because of its location in the center of the land trade “bridge” between Europe and Asia, Kazakhstan has access to the largest sales markets – the Eurasian Economic Union, Russia, China and Central Asia.

Kazakhstan has placed a major emphasis on economic diplomacy. What makes this so critical and will you highlight these efforts?

In today’s highly competitive global environment, economic and trade ties are an increasingly important part of international diplomacy. Official government visits focus not only on international political issues, but also on the development of closer economic ties. Diplomatic posts around the world not only work on political and consular issues, but increasingly engage with foreign investors, businesses and trade partners.

Each year the foreign ministry and its diplomats help to organize more than 300 trade, economic and investment events and approximately 600 foreign delegation visits to Kazakhstan. Such engagements facilitate an increase in foreign direct investment.

Kazakhstan has attracted more than $300 billion dollars in FDI since gaining its independence, making the country the leading investment destination in Central Asia. In the last two years alone, foreign companies have invested over $20 billion annually in Kazakhstan’s economy. Kazakhstan continues to adapt to new global realities to stay competitive in attracting high-quality investments.

As we seek to further modernize our economy in order to reach our goal of joining the top 30 most developed countries by 2050, we are looking to strengthen our efforts in attracting a diversified range of foreign investments and technologies.

How critical is the U.S.-Kazakhstan bilateral relationship and will you discuss the state of this relationship today?

Since the founding of our country, the U.S.-Kazakhstan bilateral relationship has been of the utmost importance to Kazakhstan. The U.S. was the first country to recognize Kazakhstan’s independence and establish diplomatic ties 27 years ago. Since then, the U.S.-Kazakhstan bilateral relationship has grown substantially. President Nursultan Nazarbayev made an official visit to Washington, D.C., last year to meet President Donald Trump and Vice President Mike Pence along with a number of business leaders. These meetings further cemented our countries’ mutual commitment to expand cooperation in many areas of shared interest, such as defense, trade, investment and energy.

In the past nine months alone, both countries engaged in an unprecedented number of highly successful bilateral visits and business meetings in a variety of sectors such as healthcare, agriculture, education, trade, culture and science. Last year U.S. Secretary of Commerce Wilbur Ross led one of the largest certified trade missions to Kazakhstan. This year we are expanding our presence in the United States by opening Kazakhstan’s Consulate General in San Francisco to boost cooperation with technology startups and foster innovation in tech policy.

What are your key priorities in your role as Ambassador of Kazakhstan to the United States?

Most of my time goes to enhancing trade and commercial ties between our countries. I constantly work to strengthen economic ties and seek new commercial opportunities. In order to promote mutually beneficial cooperation, it is necessary to understand your country’s needs while also being able to adjust to the interests of a host country.

I work to ensure that Kazakhstan continues to provide quality products and services to the U.S. markets. We are currently exploring trade and investment opportunities in various areas such as IT, finance, metals, oil, gas and agriculture.

In September 2018, the Deputy Prime Minister and Minister of Agriculture of Kazakhstan visited Washington and the Midwest. We discussed the advancement of cooperation with U.S. Secretary of Agriculture Sonny Perdue and American agricultural companies interested in entering the Kazakh market. With 24 million hectares of arable land, 188 million hectares of pasture and close proximity to the Russian, Central Asian and Chinese markets, Kazakhstan’s agricultural market has enormous untapped potential. As a practical step to help American businesses visit Kazakhstan, we established a visa-free system, opened the Consulate General in San Francisco and signed an Open Sky Agreement to enable direct flights between our countries.