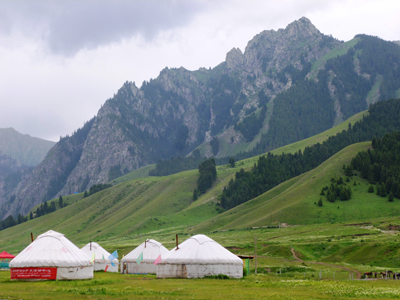 Kazakhstan is one of the most ethnically and religiously diverse in the world. This owes in part to its geography, situated in between the major world religions, but also to Soviet ethno-policies and the settlement of European migrants throughout the 20th century. Ethnic and religious tolerance have deep roots in Kazakhstan: It was in this part of the Islamic world where the Sufist tradition of Islam earned some of the strongest positions, and Kazakh nomads are known for their hospitality and openness to external influences.

Today, Kazakhstan hosts nearly 130 different ethnic groups and 17 different religious confessions. In 2010, the ethnic Kazakhs accounted for 65% of the population, the Russians 25.9%, with the remainder being spread among Uzbeks, Ukrainians, Germans, Tatars, Uyghurs, Byelorussians, Azeris, Turks, Koreans, Dungans, Poles, Greeks, and other ethnic groups. In the 2009 Census, 70% of Kazakhstan’s population identified themselves as Muslim and 26% Christians, which corresponds roughly with the share of peoples of Asian and European origins in Kazakhstan’s polity. While historically divided into zhuzes and smaller tribal formations, ethnic Kazakhs still view themselves in terms of a single body or - in popular parlance - “branches of the same Kazakh tree”.

During the Tsarist Empire’s colonization in the 19th Century, more than a million settlers from Russia, Ukraine, and Belarus came to the territories comprising modern day Kazakhstan. In the late 1920s and 1930s, Soviet collectivization and industrialization prompted the migration of an additional 1.4 million Europeans. In total, around 800,000 Germans, 185,000 Koreans, 102,000 Polish, 507,000 North Caucasians, and sizeable numbers of Crimean Tatars, Turks, Greeks, and Kalmyks were deported to Kazakhstan under Soviet ruler Joseph Stalin. Kazakhstan’s diverse society is an integral part of its nationhood. Thus, “the huge potential for integration into Kazakh culture for every ethnic group of the country”, President Nazarbayev has noted, “may be realized only through the open character of the Kazakh culture itself”.

Most Kazakhs prefer meat; hence, the favorite national dish is beshbarmak, made of lamb, horse meat, beef, and dough. This is not the only dish that contains horse meat, however. Other... Read more

Cinema in Kazakhstan can be traced back to the early 20th century. While many may not even think Kazakhstan has a prospering film industry, Kazakhstan has become a notable player in ci... Read more

The population of Kazakhstan is various by its ethnical compound. Representatives of 130 nationalities live here. The local ethnos – Kazakhs make the largest part of the population – 5... Read more

Strong evidence suggests that the Botai civilization was the first to domesticate the horse. Research and analysis of... Read more

IWD is a global day celebrating the econ... Read more

Abay Kunanbaev (1845-1904). Abay was born in 1845 at the bottom of the Chingiz Mountain in the today’s Abai district (former Karkaraly) located in Eastern Kazakhstan region (formerly, ... Read more

Meniń Qazaqstanym (‘My Kazakhstan’) is the national anthem of Kazakhstan, adopted on 7 January 2006. It is based on a homonymous song written in 1956 composed by Shamshi Kaldayakov and... Read more

The President of Kazakhstan, Nursultan Nazarbayev, has set a task to sports organizers to engage 30% of the country’s population in sports. The state features numerous sports clubs whe... Read more

Tourism in Kazakhstan - The Land of Wonders

Kazakhstan is a unique region in the world, because of its history, geographical position and size. Being the world... Read more