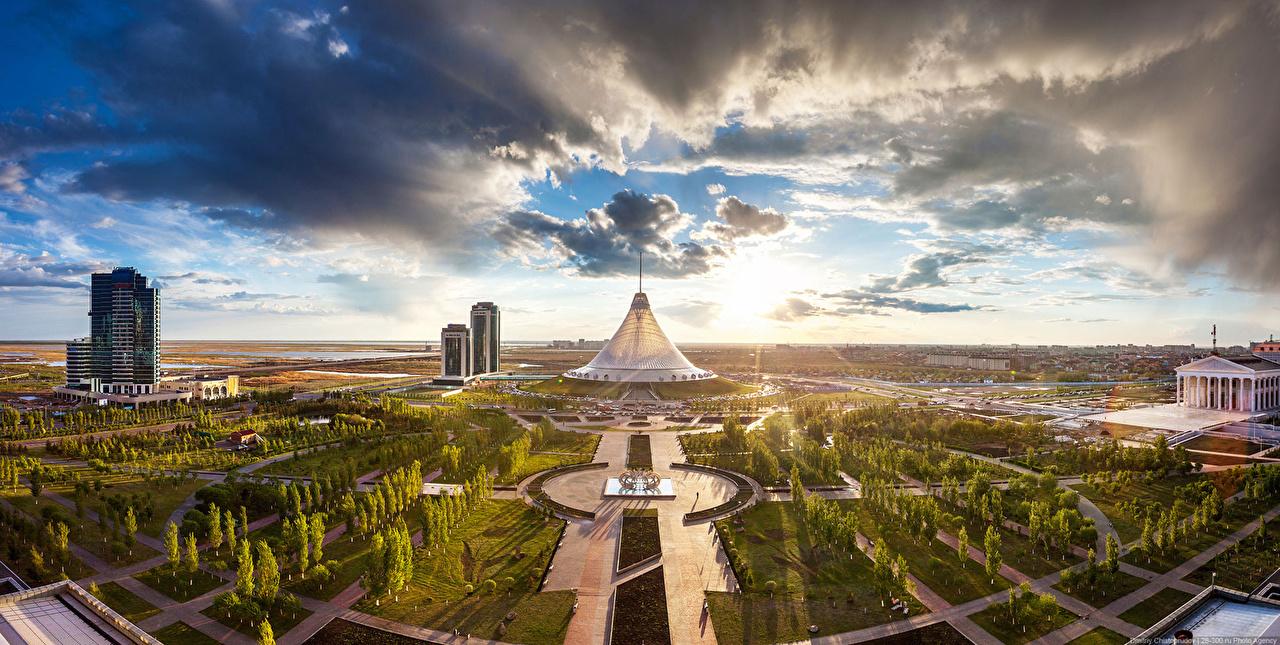 Nur-Sultan is located in the center of Kazakhstan in the dry steppe zone and in the grass steppe subzone. The area of the city stands above the flood plain of the Yessil River. The city has a climate similar to North and South Dakota with cold winters, beautiful springtimes and sweltering summers.

Nur-Sultan’s favourable location in the centre of the Eurasian continent makes it an economically advantageous transport, communication, logistics and financial center - a natural bridge between Europe and Asia and point of integration into the global economy for the region.

President Nursultan Nazarbayev made the decision to change the capital from Almaty to Astana in 1997. Astana was subsequently renamed Nur-Sultan in 2019.

Important reasons and indicators drove the effort to move the capital North. Massive construction would spark the national economy and create a new epicenter for modernization, prosperity and job growth. Always looking to the future, President Nazarbayev recognized that Kazakhstan population was young, was growing, and would exceed current capacity of the fledging Republic. New and expanded cities would be needed to meet the coming demand for housing, jobs and services for foreign guests.

Several other reasons drove the move in 1997

The transfer of the capital to Nur-Sultan gave a powerful impetus to its economic development. The city’s high economic growth rates attract numerous investors. The share of Nur-Sultan in the overall volume of investments attracted to Kazakhstan accounts for 10 percent, while the Gross Regional Product of the city amounts to 10.2 percent.

The city is the largest business center in Kazakhstan.

Entrepreneurship is rapidly developing in Nur-Sultan. Today there are more than 128,000 small and medium enterprises in the city.

Nur-Sultan is among the leading cities of the country in terms of the volume of construction. Ten million square metres of housing facilities have been built. Hundreds of companies from Kazakhstan and abroad took part in the construction of Nur-Sultan.

The architectural concept of Nur-Sultan was based on the idea of Nursultan Nazarbayev implying a special Eurasian style of Nur-Sultan should harmoniously combine the cultural traditions of both the East and the West. A well-known Japanese architect Kisho Kurokawa became the author of the general layout of the capital city.

Today Nur-Sultan, located in the heart of Eurasia, is a venue for numerous international forums, congresses and large scale international events. The Congress of Leaders of World and Traditional Religions, the Astana Economic Forum and other forums are held regularly in the city. In December, 2010, the historical Summit of the Organisation for Security and Co-operation in Europe took place in the capital city of Kazakhstan, after which it hosted the anniversary summits of the Shanghai Cooperation Organisation and Organisation of Islamic Cooperation. In early 2011, the city welcomed the participants and guests of the 7th Asian Winter Games. In 2017, Nur-Sultan hosted the international specialized exhibition EXPO-2017.

The Akmolinsk outer military district was founded in 1832 on the banks of the Esil River, in the Qaraotkel woods. Until 1961, the name of this town was Akmolinsk (Aqmola in Kazakh), and because of its ideal location, it soon turned into a central point for trade livestock fairs. In 1961, the name was changed to Tselinograd, then to Aqmola in 1992. Astana was not the official name until 1998. In 2019, the capital was renamed to Nur-Sultan after the First President of Kazakhstan, Nursultan Nazarbayev.

City of the Future At Nur-Sultan’s historical inauguration ceremony, the President declared, “From now on any major decisions important for the future of the people will be made here in the centre of this colossal country. Now the heart of our motherland is beating here. Kazakhstan is making and defining its history and destiny here and today.”

In 1998, the decision was made to officially change the name of the new capital Akmola to Astana, (“capital” in Kazakh). A year later, the Astana from waterUnited Nations Educational, Scientific and Cultural Organization (UNESCO) granted the status, “City of Peace,” to Astana.

The city’s rapid growth as the administrative and business center of the country matches the original concept for social and economic development. The theme of this concept is “The blossoming of Astana is the blossoming of Kazakhstan.”

More than 200 joint ventures and foreign companies are operating in the capital, including those belonging to:

The growth of Astana, as a result of it becoming the new capital, has had a powerful influence on neighboring industrial regions, such as:

The move has also supported the development of entrepreneurship and businesses which will, in turn, lead to the opening of foreign companies, firms, and major bank branches within the city of Astana.

Astana is a major center of activity and the hub of national and international transport links. The extensive traffic is mainly due to strong economic ties between:

Construction and the business of government have spurred investments in the local economy as well. Between 2000 and 2004, the number of new legal entities registered in the capital more than doubled, and the local housing stock nearly tripled in size.

The centers of the capital city’s economic activity are:

The city boasts a growing number of restaurants and hotels that cater to business travelers. Major exhibition centers and universities, such as the L. Gumilyov Eurasian University, can be found within Astana. The A. Barayev Research Institute of Grain Farming is another establishment, not only famous in Kazakhstan but within the scientific world. In addition to the three museums, Astana also has branches of the Union of Writers and Artists of Kazakhstan, with over 40 newspapers and two literary magazines being published in the city.

Additionally, Astana is fast becoming a mecca for sports tourism; new sport centers are planned for the neighboring areas of Korgalzhyn and Ereimentau.

Culture and the Arts

The Presidential Cultural Center of the Republic of Kazakhstan was established in the center of Astana. The structure of the Center includes a museum Cultural Centerwith various rooms and displays representing Kazakhstan’s past and present values. In addition, the Center has a library containing more than a million books and electronic catalogues.

The Kazakh National Music Academy has also been established in Astana. This Academy combines specialized and general musical education into one school. The Academy is a member of the European Association of Conservatories, Academies and Musical High Schools.

Spectators enjoy visiting theaters such as:

In addition to theaters, the pristine new cinema complex, Cinema-City, was opened in 2000. It was built in the tradition of international cinemas and has become a favorite of the people of Astana.

Eighth Wonder of the World

In September 2006, the inauguration of the Palace of Peace and Accord (62 meters in height), also known as the Peace Pyramid, marked another milestone in Astana’s evolution and may well become the Eighth Wonder of the World. Built to house the Assembly of Nations of Kazakhstan, a university, a museum, a library and a winter garden, the pyramid was designed by British architect Sir Norman Foster, who is famous for his futuristic glass roof on the German Parliament, the Reichstag.

Construction of the new city developments on left bank of the Esil River has started. To aid in this process, the Special Economic Zone (SEZ), providing more favorable conditions for investment, has been created. According to the General Development Plan of the Capital, the integrated structure of this complex, located on the left bank, will symbolize the new capital.

The creation of the SEZ will provide many benefits to both the state and potential investors, including:

The following goods and equipment are customs-free:

The region around Astana is one of the Republic’s granaries and a large center of agricultural machine-building. In fact, it produces:

Land being used for crops constitutes 3,422.6 hectare (ha), a metric unit of area equivalent to 107,637 square feet. Other industries are thriving too, including:

Industry development within the region has most often been associated with agriculture, namely the processing of agricultural raw products. The region is fairly active in conducting foreign economic activities; it maintains mutually advantageous relations with many countries, including the major trade partners of:

Exported products to CIS countries, such as those listed above, are primarily:

The remaining share of exports is shipped to non-CIS countries, such as:

Imported products from these countries include:

In addition to agricultural products, there is also an abundance of mineral reserves, concentrated in the northern region of Astana. The most common are:

Astana lies in the northern part of Central Kazakhstan. Its territory is approximately 96,800 sq. km. The surrounding landscape is far from uniform, as hills intermingle with low mountains, plains, and river valleys. In the North is found the Kokshetau summit; in the southern and south-eastern portions of the region is the Saryarka, part of the Kazakh topography; and plains compose the North-East.

The climate is sharply continental with aridity rapidly increasing to the South. The average temperature in January is -16° C, rising to 22° C in July. At the extreme, winter temperatures can reach - 40° C, and summer temperatures sometimes rise above 35° C, with dust-laden storms and hot dry winds.

The largest rivers in the area are the Ishim and the Nura. Lakes include:

The region contains a vast variety of animals:

The rarest species include:

To protect rare disappearing species of animals, nature and game preserves have been established. Some 66 species of plants exist in the region, filling an area of 4,391.6 ha.