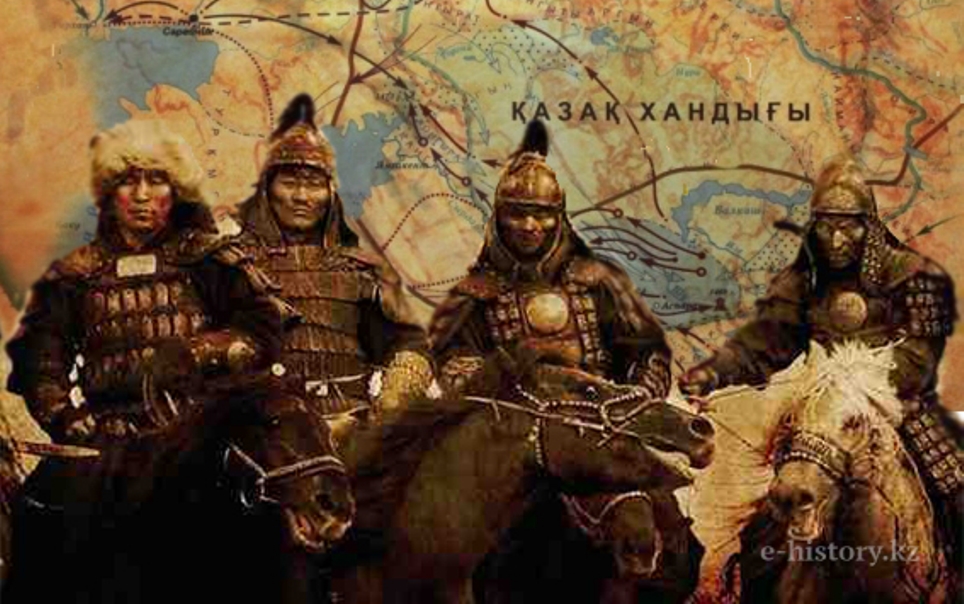 Why Celebrate 550 Years of Kazakh Statehood?

Words, particularly names, can have a great power. Astana means “capital” in Kazakh. The name was suggested by President Nursultan Nazarbayev and has now become one of the brands strongly associated with the Republic of Kazakhstan.

But what about “Kazakhstan” itself? There was a discussion a year ago about the President’s proposal to consider renaming the country “Kazakh Yeli”. The great monument on Independence Square in Astana actually bears that name. And “Kazakh Yeli” actually means “the land of Kazakhs” or “Kazakhland”. Just as Deutschland, Poland, Finland and Thailand is a simple description of who, mostly, lives in each country. In fact, “Kazakhstan” has exactly the same meaning as “Kazakh Yeli”, but in Persian (with “stan” meaning land). So where did this name of the sovereign state, which has been a member of the United Nations for the last 23 years, come from?

History textbooks tell us that the first use of the word “Kazakh” dates back to the late 13th century. It is considered to be of Turkic origin and means “a free man”, i.e. “someone who left his tribe or clan to live a life of an adventurer.” Many scholars believe that Russian word for “Kazak” meaning “Cossack” most likely originated from the same word.

When back in 1459 several clans followed Sultans Kerey and Zhanibek in defiance of Khan Abulkhair Sheibanid, the powerful ruler of “nomadic Uzbeks”, and migrated out of their native land to the valleys of rivers Shu and Talas, they were called “Kazakhs”, in the pejorative meaning of being“outsiders”. The union of tribes led by Kerey and Zhanibek quickly grew in numbers and strength throughout 1460s and 1470s, “Kazakh” gradually became a name associated with the people behind the new military force and, subsequently, the name of the state that developed from it.

The key source on Kazakh khanate’s early history – Mirza Mukhammad Khaidar Douglat’s study “Tarih-i-Rashidi”, written between 1541 and 1546, labelled the new state “doulat-i kazak” (the Kazakh state). For a few decades in the late 15th century and the first decade of the 16th century, the heirs of Abulkhair Khan Sheibanid, or Uzbeks as they were known then, challenged the legitimacy of the Kazakh rulers’ claim to the title of khan. Unsuccessful in these efforts,  they instead conquered the fertile lands between the Central Asia’s two largest rivers Syr Darya and Amu Darya, known frrom the earliest times to the Iranians as “the lands beyond the river (Amu Dariya)” or Maverannakhr in the Arabic language. Having settled there, the Sheibanids dropped their ambition to “punish” their “rebellious” cousins. From around  1510, and well into the mid-19th century, the territory  to the north of the agricultural lands of Syr Dariya valley, were ruled by those who claimed the title of “khan” and lineage from Kerey and Zhanibek, and thus from Genghis Khan.

That those rulers were recognized as “legitimate” holders of the title is confirmed by the Russian colonial administration’s acceptance of  the practice, long after most Kazakh clans and their leaders came under the Tsar’s protectorate in  mid-18th century, and well into the first quarter of 19th century (the reforms of 1822-1824 cancelled the administrative references to Kazakh Khans, although in 1841-1847 the rebellious sultan Kenessary Kassymuly was recognised by most Kazakhs as their Khan).

It was around 1562 when the Kazakh khanate first became known in Western Europe. It appeared as “Cassackia” on a map drawn by Anthony Jenkinson, an English diplomat and traveller, to fill in the area between “Tashkent” and “Siberia”. Even if Jenkinson never visited this part of the Great Steppe, he was likely to learn about the Kazakh khanate from the Russians, as he was the English Crown’s first ambassador to Moscow during the time of Tsar Ivan the Terrible.

A state of nomadic people has notable differences from that of a people with settled populations inhabiting towns and villages. Because of the nature of their economy, the nomads did not have much access to writing materials to document their everyday lives. This, of course, hampered the development of a proper tax system to fund the functioning of the administration. It also explains why there are fewer historical sources shedding light on the developments in nomadic states like the Kazakh khanate. However, a rich oral tradition flourished and the Kazakh language now has few regional differences, despite more than 3,000 kilometres of distance separating western and eastern Kazakhs and more than 1,500 kilometres those living in northern and southern parts.

There was also less division of labour in nomadic societies. Because nomads do not live in settlements, there were no schools with specialised education. Enforcement of court decisions was problematic and was often based on voluntary acceptance of the punishment since there were no prisons and plenty of space into which to escape. Nor did a permanent army exist. The reality was leaders had little difficulty in quickly assembling a capable military force in case of a conflict or a war.

These factors naturally proved to be historical weaknesses that eventually led to the end of nomadic states between 17th and 19th centuries. The settled populations were more advanced and more powerful.  But this does not deny the nomadic political entities their status as states.

In the case of Kazakhs, between 1465 and 1822, there was a distinct population of “Kazakhs”, whose rulers held the titles of “khans.” They were recognised descendants of the history’s most powerful conqueror, Genghis Khan, with legitimacy to rule. This history shows the statehood of the “Kazakh people”.

Today most members of the United Nations are nation-states. The issue of “nation” is a more complicated and nuanced than a “state”. It will most likely remain a subject of heated academic debate for the foreseeable future and, unfortunately, will continue to be politicised. Kazakhstan, as most other political entities in the world, positions itself as a “nation-state.” The preamble of its Constitution begins with the statement, “We, the people of Kazakhstan, united by a common historic fate, [are] creating a state on the indigenous Kazakh land.” So the nation of Kazakhstan includes the entire population, which has lived through historic experiences that have united “the people of Kazakhstan”. The clear reference to the “indigenous” Kazakh land links the modern state with its predecessor, the Kazakh khanate.

According to Ernest Gellner, the definition of nationalism is “primarily a political principle, which holds that political and national unit should be congruent.” Gellner relied on German sociologist Max Weber’s definition of state, i.e. “political unit”, as an agency which has a monopoly of ‘legitimate violence’ in a certain territory”. If we have a political unit of “The Republic of Kazakhstan”, what is a “national unit”? It is clear that the initial national unit that created the very idea of Kazakhstan were the ethnic Kazakhs.

There is an argument, though not particularly mainstream, that the political unit of Kazakhstan is not congruent with the national one. It claims that Kazakhstan’s contemporary borders are artificial and were simply drawn up by Bolsheviks, while the nation of “Kazakhs” was artificially modelled on Stalin’s imagination of “national policies”. But it is hard to see what the evidence to support this view is.

It is true, of course, that many modern nations in Asia and Africa bear traces of purposeful modelling along the lines drawn from the 19th century European and American experiences of nation-building. But a nation is rarely sustainable without some “ethnic” origins – a bond through people who have inhabited the particular territory for generations and feel connected to the land.  Otherwise, the attempt to create a nation-state is most likely to fail.

This bond is what helps define the modern nation of Kazakhstan. It was “modelled” to reflect the living historical bond with the Kazakh people and their heritage. Borders of the nation with this name took shape mainly in 1920s when the Kazakh Autonomous Soviet Socialist Republic was created. The borders may have been drawn in Moscow but the decisions came after protracted debates involving the representatives of local communists. These included former members of the Alash Orda “national(ist)” movement, which rallied in 1917-1919 for the creation of territorial autonomy for Kazakhs within a new democratic statehood of Russia.

The borders they proposed were based on the most relevant demographic and statistical data of the time, such as the census of the Russian Empire’s population in 1897. According to this census, speakers of “Kirgiz-Kaisak”, –  the Kazakh language – numbered more than 4 million people at the time and constituted more than 80% of the areas within the “artificial” borders of contemporary Kazakhstan. So part of the reason for Kazakhstan’s politically stable development must be due to this congruence between the “national” and “political” units, created by the Soviets in the early 1920s.

The 20th century, however, has turned Kazakhstan into a multiethnic, multicultural society that it is today. A major change in the country’s demographic structure was shaped by several waves of mainly voluntary, economically motivated migrations of Slavic (Russians, Ukrainians, Belarusians) and some Turkic groups (Tatars, Uighur, Uzbeks), along with the Stalin era’s involuntary resettlements of Germans, Poles, Koreans, Chechens, and other Caucasian peoples.

Kazakhstan’s good fortune is that, despite these shake-ups, these diverse groups have lived in harmony with each other. The country has experienced no major conflict along ethnic or religious lines. Moreover, the hardships of forced collectivisation, being part of the Soviet Union’s grand war effort against Nazi Germany, post-war reconstruction, and then the break-up of the USSR and the difficult adaptation to a free market economy that followed,  all brought the people of different ethnicities closer together, strengthening tolerance and the need for mutual understanding and solidarity. These challenges have helped unite them into a single group – “the people of Kazakhstan”. Whether you call it a “Kazakh nation”, in line with international thesaurus, is a matter of a secondary importance.

Then why at all celebrate the Kazakh khanate’s anniversary? For the same reason people mark anniversaries of a major past event all around the world. It is an opportunity to remind ourselves of our background,  reflect on the journey of our culture and strengthen the understanding of who we are. The celebration of 550 years of the Kazakh khanate will help further unite all of us who chose to live in the land of the Kazakhs as one “people of Kazakhstan” and will strengthen our links with this land.