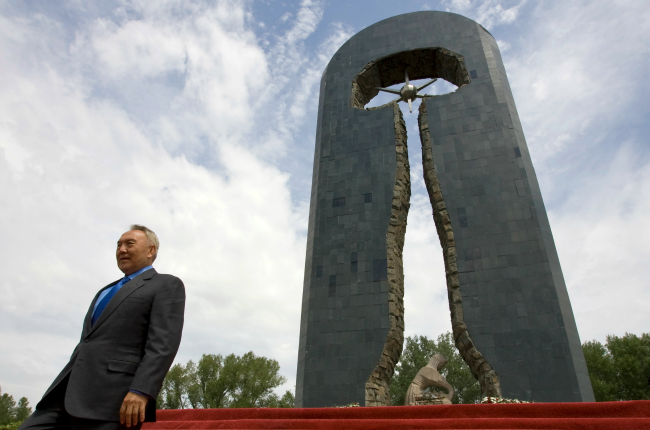 All facets of modern Kazakhstan and national identity have been shaped by its history with nuclear weapons. The lives of all Kazakhs have in some way been singed by nuclear testing. The former Soviet Union treated Kazakh soil as a nuclear testing ground and conducted as many as 460 nuclear tests.

Kazakhstan inherited upon independence more than 1400 nuclear weapons, and President Nazarbayev quickly moved to decommission each warhead and tactical weapon. Today Kazakhstan stands as an clear example of how a nation can obtain economic prosperity and national security without nuclear weapons, rather than with them.

The Government of Kazakhstan’s contribution to the nuclear disarmament program demonstrates its commitment to the objectives of global security, establishing Kazakhstan as a critical member of the world community.

Kazakhstan’s experience in disarming itself of nuclear weapons following the fall of the Soviet Union could serve as a model for other countries, most notably Iran. During a symposium held here on Capitol Hill, Kazakh and U.S. officials, former officials and other experts detailed Kazakhstan’s transformation during the 1990s from a newly independent country possessing one of the world’s largest nuclear arsenals to one that renounced nuclear weapons and has since worked to dismantle its Soviet-era WMD architecture with U.S. assistance.

On the 29th of December 1991, the leaders of Belarus, Kazakhstan, Russia and Ukraine signed the Almaty Declaration, in which they agreed on the control mechanisms over the operation of the nuclear arsenal of the former USSR and affirmed their international obligations concerning the strategic arms reduction.

On the 23rd of May 1992, in Lisbon the representatives of Kazakhstan, Belarus, Ukraine, Russia and USA signed a five party Protocol to the Strategic Arms Reduction Treaty. At the same time Belarus, Ukraine and Kazakhstan, as the states possessing nuclear weapons, committed themselves to the Non-Proliferation Treaty. Thus Kazakhstan has made a historical decision to renounce its nuclear heritage which was an important step strengthening the statehood of our country as an integral part of existing world civilization.

In accordance with the Lisbon Protocol, Kazakhstan, Belarus and Ukraine, as successor states to the USSR in terms of the Strategic Arms Reduction Treaty, have agreed to participate, along with Russia and USA, in the work of the joint Commission on observance and inspection. They have also agreed to conclude agreements on the limits and restrictions specified by the Treaty. Kazakhstan ratified the Treaty and the Lisbon Protocol, which is an integral part of the Treaty, on the 2nd of July 1992. The Strategic Arms Reduction Treaty came into force in 1994 and paved the way to disarmament and the elimination of more than 9,000 nuclear warheads under strict supervision.

Kazakhstan was the first among the participants of the Lisbon Protocol to implement the provisions concerning removal of nuclear warheads. On the 21st of April 1996 the process of removal of 1416 nuclear warheads from Kazakhstan territory was completed. On the 30th of May 1995 the last nuclear test warhead, which was located in a gallery on the Semipalatinsk test site, was destroyed. Finally Kazakhstan had got rid of its nuclear inheritance forever.

During the Soviet era, Kazakhstan was the site of the world’s fourth largest nuclear arsenal of more than 1000 deadly ICBMs which posed a menacing, if not dangerous, threat to international peace, depending on the leadership and direction of that country when it became independent in 1991. Fortunately, that leader was President Nursultan Nazarbayev who acted decisively to order the dismantling and removal of the country’s entire nuclear weapons system.

In 1994, Kazakhstan transferred more than a half-ton of weapons-grade uranium to the U.S. In 1995, Kazakhstan removed its last nuclear warhead and, with U.S. assistance, completed the sealing of 181 nuclear test tunnels in May 2000. Kazakhstan has signed the START Treaty (1992), the Nuclear Non-Proliferation Treaty (1993), the Chemical Weapons Convention, and the Comprehensive Test Ban Treaty (2001).

On March, 21, 2009 the Treaty on Nuclear Weapon Free Zone in Central Asia, signed on September, 8, 2006 in Semei, Kazakhstan, went into force. Kazakhstan welcomes the Treaty’s becoming effective and believes that it will contribute to global non-proliferation process and promote regional and international security. The new denuclearized zone in Central Asia has a number of unique features. First, one of the zone’s state namely, Kazakhstan, in the past possessed the forth largest nuclear arsenal. Secondly, for the first time the denuclearized zone is created in Northern hemisphere. Thirdly, this Treaty becomes the first multilateral agreement in security area which brings together all five Central Asian countries. And finally, for the first time the denuclearized zone has been created in the region which borders upon two nuclear states. The Protocol on negative security assurances is an integral part of the Treaty. Under the Protocol, the nuclear weapon states pledge not to use or threaten to use nuclear weapons against any states member to the Treaty.

On June 18, 2009 over 25,000 locals, Kazakh dignitaries and world media gathered in Semey city to celebrate the 20th anniversary of Kazakhstan’s decision to stop nuclear tests at the Semipalatinsk Test Site. The meeting was held in Semey where President Nursultan Nazarbayev addressed an appeal to the international community to back up the peaceful mission of Kazakhstan. In his speech, President Nazarbayev emphasized that refusal to conduct nuclear testing has become possible due to courage and enthusiasm of millions of Kazakhs that put an end to the crimes against lives and health of the whole people of Kazakhstan. Besides he noted that “starting from the first days of the country’s independence, Kazakhstan did not leave its citizens alone with their problems. The work on social rehabilitation of the population and the territories suffered the harm of the nuclear tests is being constantly carried out. For these purposes the state utilized nearly KZT 34 billion (approximately $215 million)”.

In December 2009, the UN General Assembly unanimously accepted a resolution put forward by Kazakhstan proclaiming August 29, the day when in 1991 President Nursultan Nazarbayev signed a decree on the closure of Semipalatinsk Test Site, as the ‘International Day against Nuclear Tests’. Recognizing the negative impact of nuclear testing on human life and the environment, as well as the importance of ending nuclear tests as one of the key means of achieving a nuclear-weapon-free world, the Resolution sets out to commemorate a significant date in Kazakhstan’s – and, indeed, - the world’s history.

During the Nuclear Security Summit in Washington, D.C. in April, 2010 Obama praised President Nazarbayev “as really one of the model leaders in the world on nonproliferation and nuclear-safety issues”. U.S. President B. Obama and other leaders also took positive view on President Nazarbayev’s proposition to establish an International Nuclear Fuel Bank on the Kazakh territory. President Nazarbayev highly appraised the antinuclear initiatives and achievements of the U.S. President in ensuring international security, namely, convocation of the Global Nuclear Security Summit, signing the New START Treaty with Russia, adoption of the new US nuclear posture review which had become a great step towards establishment of the nuclear-free world.

Under President Nazarbayev’s leadership, Kazakhstan has proved that a country can gain prosperity and security without nuclear weapons rather than with them. Since becoming an independ... Read more

Karipbek Kuyukov was born without arms as a result of nuclear radiation exposure. He has devoted his life and art to making sure that no one – and nowhere – else suffers the devastatin... Read more