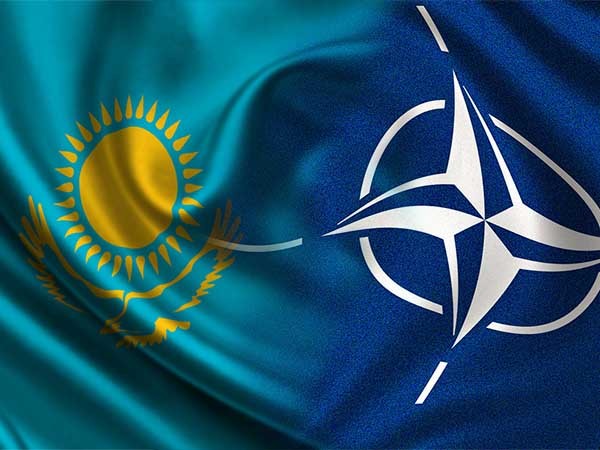 Cooperation of the Republic of Kazakhstan with NATO is based on the Frame document of the Partnership for Peace (PFP) signed in 1994. It includes positions directed for achievement of the following purposes: development of transparency in processes of military planning and formation of the military budget; ensuring democratic control over Armed forces; maintenance of potential and fighting capacity of forces for entering of its contribution into operations under the aegis of the United Nations and/or under the direction of NATO; development of the military relations of cooperation with NATO with a view of joint planning of educational combat training and carrying out doctrines to increase ability to carry out peacekeeping, humanitarian, and other operations; creation of forces which are capable to cooperate with forces of NATO in the long term.

The individual plan of action of partnership was accepted on January 31, 2006 for the purpose of harmonization of all aspects of interaction and their coordination with NATO.

5 meetings with representatives of state authorities; 5 working meetings of experts of state authorities of Kazakhstan and NATO for an assessment of realization of IPAP; 1 meeting on the Clearing House mechanism (discussion of assistance to Kazakhstan from NATO countries on IPAP realization); 5 joint meetings of high level of North Atlantic Council and Kazakhstan in the NATO+Kazakhstan format took place within IPAP realization during the period from 2006 to 2012. On May 25 2011, Meeting of Committee on policy and partnership in the NATO+Kazakhstan format for discussion of an assessment of realization of the second cycle IPAP for 2009-2011 was held. The document was positively estimated by Alliance.

The Ministry of Defense in coordination with the interested state authorities of the Republic of Kazakhstan developed the third cycle IPAP for 2012-2013. The project is coordinated previously with the International staff of NATO. New actions in the field of policy, extreme civil planning, a science, and the military sphere are included in it.

Interaction activization on the mechanism “Clearing House” which can affect high-quality realization of IPAP and plans of bilateral cooperation is initiated. Kazakhstan still shows interest in support of Alliance in definition of the leading country of Alliance (previously the USA expressed readiness to represent itself as the leading state).

Kazakhstan participates in the “Planning and analysis process” (PAP) program since 2002. PAP is directed on basis creation for definition of structure and an assessment of forces and means, which can be presented for carrying out trainings, doctrines and operations at multinational level in interaction with forces of NATO, including peacekeeping operations. PAP has a biennial cycle. By means of selection and then realization of «The partnership purposes» are undertaken measures to increase the ability of divisions of AF of RK to cooperate with divisions of AF of the countries of NATO.

The total number of the Purposes of Kazakhstan partnership according to a cycle PAP in 2010 makes 31 (of them 27 from MD, 3 BS from NSC RK, 1 from MES).

The package of the Purposes of partnership includes the following questions:

In October 2011, meeting of Committee on policy and partnership in the NATO+Kazakhstan format on discussion of the text of the report of an assessment of realization accepted in 2010 took place. The Ministry of Defense led by the deputy Minister of Defense B. Maykeyev represented Kazakhstan at the meeting.

In January, 2004 Kazakhstan joined the program «Concept of operative potential» (COP). The program itself presents the mechanism of an assessment of degree of readiness of peacekeeping divisions of the partner countries to interaction with armed forces of the countries of NATO. COP supplements the assessment which is carried out within PAP and promotes increase of military efficiency of estimated forces.

Now fifteen already were trained on NATO courses on preparation of appraisers of COP on the first level and three officers of AF RK on the second level which allows to carry out self-image of the divisions (the peacekeeping battalion “Kazbat”) according to requirements of standards of NATO and they can participate on an assessment of divisions of the partner countries declared on the COP program on the basis of inquiry of Alliance.

In 2006 and 2008 during carrying out the «Steppe Eagle» doctrine by experts of NATO the assessment of operative compatibility of the 2nd company of the peacekeeping battalion “Kazbat” and the battalion with forces and means of NATO is carried out. The company is recognized operatively compatible, and a battalion partially operatively as the compatible.

In 2009-2010 actions within the COP program weren’t carried out. Participation of four Kazakhstan officers on a course on preparation of appraisers of the first level of the COP program is planned in May and June, 2012. Thus, in AF of RK number of prepared appraisers will be nineteen. According to COP program, term of certification of “Kazbat” procedures were expired in 2011 .In this regard, the Plan of implementation of the program NATO is approved and coordinated with NATO. For 2012-2013 within which for 2012 “Kazbat’” self-image by national experts, is planned for 2013 “Kazbat” assessment experts by NATO.

Within preparation and carrying out self-image of “Kazbat” during the «Steppe eagle-2012» doctrine in the spirit of PFP in September of this year on the range “Iliysky” from February 7 to February 10, 2012 is led to the period advisory visit of experts of NATO to RK for acquaintance with procedures of carrying out self-image within the COPEK program.

Also in May visit of three experts of NATO to RK for acquaintance with methods of carrying out self-image within the COP program of this year is planned.

The individual program of partnership and cooperation (IPPC) serves as the annual plan of cooperation between Kazakhstan and NATO, in it the concrete actions which are subject to implementation on 37 (earlier - 33) areas of cooperation which include: assistance in strengthening of democratic control over armed forces, operative compatibility of forces and means, fight against terrorism and extreme civil planning.

In 2011 147 actions took place within IPPC (507 military personnel serving AF RK, other armies and military formations). 180 actions are planned for 2012 within IPPC (by MD – 160, the MES – 11, MFA-5, the MIA – 2, PS NSC-2). This program also includes the actions which are carried out in the territory of Kazakhstan, such as seminars «Legal aspects of peacekeeping operations», «Process of planning of operations», courses «Military terminology of English in multinational operations», «Staff procedures of NATO» and «Acquaintance with culture and traditions of the people of Central Asia and Afghanistan» with participation of the military personnel of Kazakhstan and representatives of the countries of NATO and partners.

In 2011 the Kazakhstan military personnel took part in the following doctrines:

Courses on preparation for participation in missions of the United Nations from 2003 to 2012 over 30 military personnel of of RK had training preparation within IPPC. Participation of the military personnel of AF of RK in doctrines «Longbou’s Cooperative», “Lancer Cooperative”, “Combined Endevour”, «Regional cooperation», “Amber Hope”, «Search of the khan» is planned in 2012.

It should be noted that realization of actions of IPPC in 2012 can be less effective, than in previous years in connection with new financial policy of NATO concerning some countries of partners (Republic of Belarus, the Republic of Kazakhstan, Macedonia, Montenegro and Serbia).

Note: Gross domestic product of the Republic of Kazakhstan made 11 300 US dollars per capita in 2011. In the current year gross domestic product growth in 12 500 US dollars per capita is predicted. The Republic of Kazakhstan is included in the list of the partner countries, to which NATO can render to 80 % of financial support for participation in the planned actions within cooperation with Alliance.

Due to the late informing by Alliance and the adoption of the budget of the Ministry of Defence of RK for 2012 the planned actions of IPPC-2012 will be realized within funds of MD of RK provided in the budget for 2012.

On July 1, 2008 on the Central Asian region on the basis of Military institute of Land forces the Training centre “Partnership for Peace” is created for the first time within realization of IPAP of Kazakhstan with NATO. A main objective of the centre is preparation of the military personnel of AF of RK, the countries of NATO and partners for participation in peacekeeping operations.

On December 20, 2010 KAZTSENT was recognized as the 19th educational center of PFP/NATO by North Atlantic Alliance.

During 2011 on the basis of KAZTSENT more than 20 actions with participation of the military personnel and serving AF RK, the countries of NATO and partners were carried out. In May, 2011 the course «Military terminology of English» passed certification of Alliance in multinational operations and is included in the catalogue of actions of NATO. In January, 2012 this course was carried out with participation of representatives of the countries of NATO and partners, including representatives of NATO School.

Also in February, 2012 the policy «Staff procedures of NATO» with participation of instructors from UT`s PFP of the Turkish Republic with a view of studying of staff work of NATO by the military personnel of AF RK was followed.

In November of the current year on the basis of KAZTSENT «Acquaintance with culture and traditions of the people of Central Asia and Afghanistan» is planned with participation of representatives of the International staffs of NATO, NATO School, the countries of Alliance and partners. Also the course will be estimated by experts of NATO for the purpose of official certification.

The agreement on safety between the Organization of the North Atlantic Contract and SEAP and/or PFP participating countries» regulates an exchange of confidential information. It was signed on July 31, 1996. It is ratified on October 26, 2005. With a view of definition of national authority on safety of information of NATO there was a Resolution of the government of RK prepared by the Ministry of Defence «About modification of the resolution of the government of the Republic of Kazakhstan from December 15, 1999 of No. 1920-114dsp» (No. 1183dsp from 05.12.2007). NSC of RK was defined as the national authority.

Now the Ministries of Defence, Foreign Affairs, Emergency Situations and Committee of National Security together with Department of protection of the state secrets of Office of the Prime minister of the Republic of Kazakhstan are carrying out work on practical implementation of this Agreement.

According to the developed draft of the Resolution of the Government of RK it is offered to determine Office of the Prime minister of the Republic of Kazakhstan to be coordinating body by performance of the Agreement on safety. The officer of communication of NATO across Central Asia was appointed according to solutions of the Istanbul summit of NATO of 2004 for the solution of problems of development of practical cooperation with NATO, providing consultations on implementation of programs.

Since 2003 through air space of Kazakhstan more than 13 thousand planes of the NATO member states made flight, more than 150 – permission for emergency landing in the Kazakhstan airfields was provided. The Agreement between the Republic of Kazakhstan and NATO about providing railway transit through the territory of Kazakhstan for not military cargoes of NATO in favor of ISAF is signed at the end of December 2009 and in January, 2010. The Agreement undergoes interstate procedure on its ratification.

The priority directions of cooperation with NATO in the defensive sphere are: